Tesla ($TSLA) has been a phenomenal company to follow, largely because of the creativity, conviction, intellect and drive of their employees and CEO Elon Musk.  Business students years from now will have case studies on how Mr. Musk almost went broke, but managed to turn both his companies; SpaceX and Tesla around to formidable powerhouses in modern society.  He amongst Jeff Bezos and Jack Ma are who we will consider elite CEO’s of our generation.

Regardless of management talent, I want to highlight how TSLA has traded and manipulated from 10/27/14 – 10/29/14.  So the story goes like this, on October 27, 2014 at 11:03 a.m. the wire gets a hold of a story by the Wall Street Journal, which cites WardsAuto.com as a source saying that Tesla Sales Down 26% through September vs prior year.  The obvious happens in light of this information and this stock just caters about 9% to close below $222.  That might be only $10 swing you say, however that swing represents approximately $1.5 billion in market cap. (as of 10/31/14) 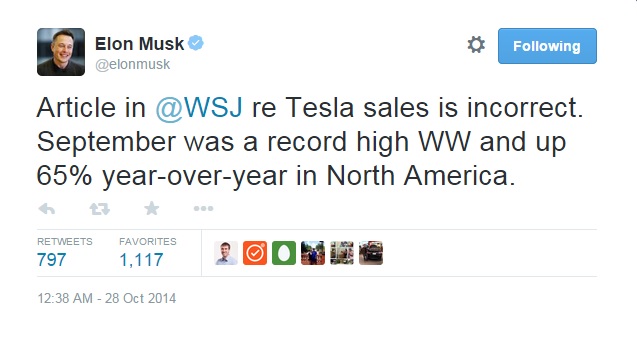 The next morning, $TSLA has a huge day and closes up above $242.5.  It’s like nothing happened, well almost. Here’s a theory, that article was fabricated and leaked out to the masses intentionally so that some individuals could get that price around $220 or make everyone else fill their stops.  Obviously this could all just be a mere coincidence and a tale of a financial journal rushing to get the news out first regardless of credibility.  Time will tell as the Company has an earnings release coming up.

Obviously, nothing here is a recommendation to buy or sell the security, it just an example of how volatile equities can become in our world of real-time information, regardless of whether the information is accurate or not.