(1)  Demand is low because of weak economic activity, increased efficiency, and a growing dependence away from oil to other fuels.

(2) Turmoil in Iraq and Libya has not affected their output.

(3) America has become the world’s largest oil producer. Though it does not export crude oil, it now imports much less, creating a lot of spare supply.

(4) The Saudis and their Gulf allies have decided not to sacrifice their own market share to restore the price. Saudi Arabia can tolerate lower oil prices quite easily. It has $900 billion in reserves.

Clearly market forces that affect supply and demand are all that matters.  Industry experts are left befuddled  as they exclaim “We’re at the stupid range,” Stephen Schork, editor and founder of The Schork Report, said in an interview with CNBC.  “We don’t know how much lower oil can go,” Schork said. “It’s similar to 2008 when we knew oil at $120, $130 and $140 made no sense, but high prices became the reason for higher prices. It’s the same thing in reverse.”

Is $40-45 a barrel a realistic scenario? Time will tell but as for now, if we’re not driving around a Tesla or a Prius we are still happy to see this: 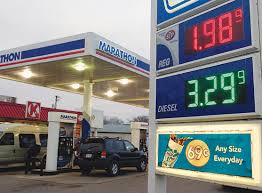